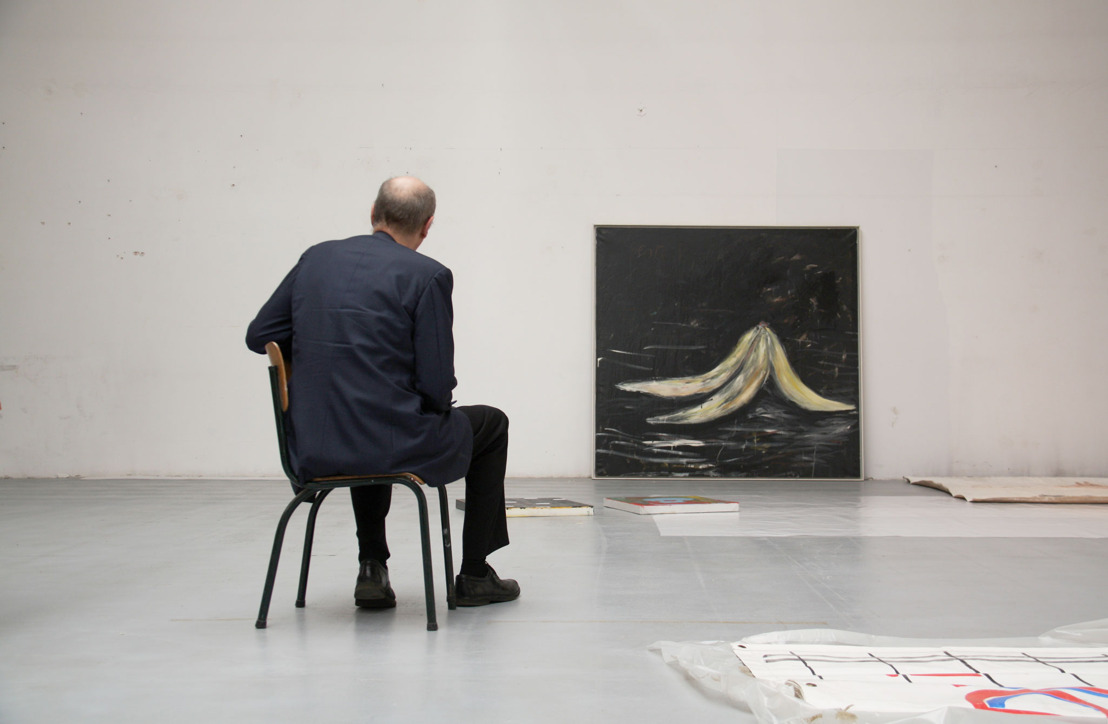 Xavier Hufkens is delighted to announce an exhibition of new paintings by Walter Swennen (b. 1946). Created throughout 2020, the works have a diary-like quality and are informed as much by contemporary events as by episodes of reflection and recollection. But as is typical of Swennen’s oeuvre, a deeper undercurrent is at play, with each canvas also exploring some of the central issues at the heart of any creative discipline: what to make, how to make it, and why.

To step inside Swennen’s universe is to enter a colourful and apparently illogical world, one in which enigmatic combinations of texts and images seem to beg for decipherment. Intrigued by the unusual juxtapositions, we instinctively want to know what the paintings mean, or are trying to say. While not all of the works transmit their secrets easily, a number of insights are offered in the new publication that accompanies the exhibition. ‘MIN SORG ER MIN BORG’, for example, translates as ‘my sorrow is my castle’, a quote by the Danish philosopher Søren Kierkegaard. It also calls to mind the phrase ‘an Englishman’s home is his castle’. The words—in which ‘MIN’ is repeated and ‘SORG’ and ‘BORG’ mirror one another — are combined with the image of a castle and the head of a snake-like creature (or perhaps, as Swennen also intimated, the Loch Ness monster). A smaller work contains the word ‘goodbye’ and a hat that, thanks to its oval shape, could easily be mistaken for a flying saucer (or saintly halo?). It also happens to be a pork-pie hat, of the kind synonymous with Lester Young, the jazz musician to whom Charles Mingus paid tribute in ‘Goodbye Pork Pie Hat’.

Jazz, and more specifically the art of improvisation, is an interesting lens through which to consider Swennen’s work. Like the best extemporiser, the artist never makes the same painting twice. He works without premeditation, eschews convention and has no interest in in mimesis, let alone style. His paintings are created, instead, through a process of intuitive unfolding: one thing leads to another, there are encounters and accidents, spur ofthe moment decisions, the exploration of unusual effects, reflections and interactions, the use of ‘errors’ to create new possibilities and, ultimately, an irrepressible energy and rawness to the end result. As Swennen himself has said: ‘the work starts on the canvas, is made on the canvas, and it’s on the canvas that it’s finished’. His sources are the visual references at his disposal— advertisements, logos, signs, old paintings, photos and random objects that happen to catch his eye—as well as language, and the medium itself, the paint. But take note: an image might be the catalyst for a work but is not always its subject. Nor are the paintings rapidly executed as many take months to complete. They are also incredibly multi-layered. Firstly, there is a material layering which, if one looks closely enough, might be discernible on the surface or edges of the canvas. Secondly, there is the question of time. Not only is there a durational aspect to the making of the works, but they evoke, and often juxtapose, elements borrowed from different eras. Finally, there is a conceptual layering that is harder to pin down. In Swennen’s paintings, letters and images become detached from their typical contexts and enter into fresh visual and linguistic relationships. Words conjure up images, just as images possess linguistic connotations. It is this interface — between text and image, on the one hand, and the act of painting on the other — that fascinates Swennen. What becomes visible in these paintings, therefore, is less of a knowable reality and more of a cognitive process, a unique way of thinking about the world and making sense of its myriad wonders, sorrows and, above all, absurdities. In other words, these paintings are manifestations of the way in which Walter Swennen thinks.

Walter Swennen (b. 1946) lives and works in Brussels. His work will be the subject of a major exhibition this year, Das Phantom der Malerei, that opens in the Kunstmuseum Bonn, Germany, and travels to the Kunstmuseum Den Haag, the Netherlands (2022). Other solo exhibitions include: La pittura