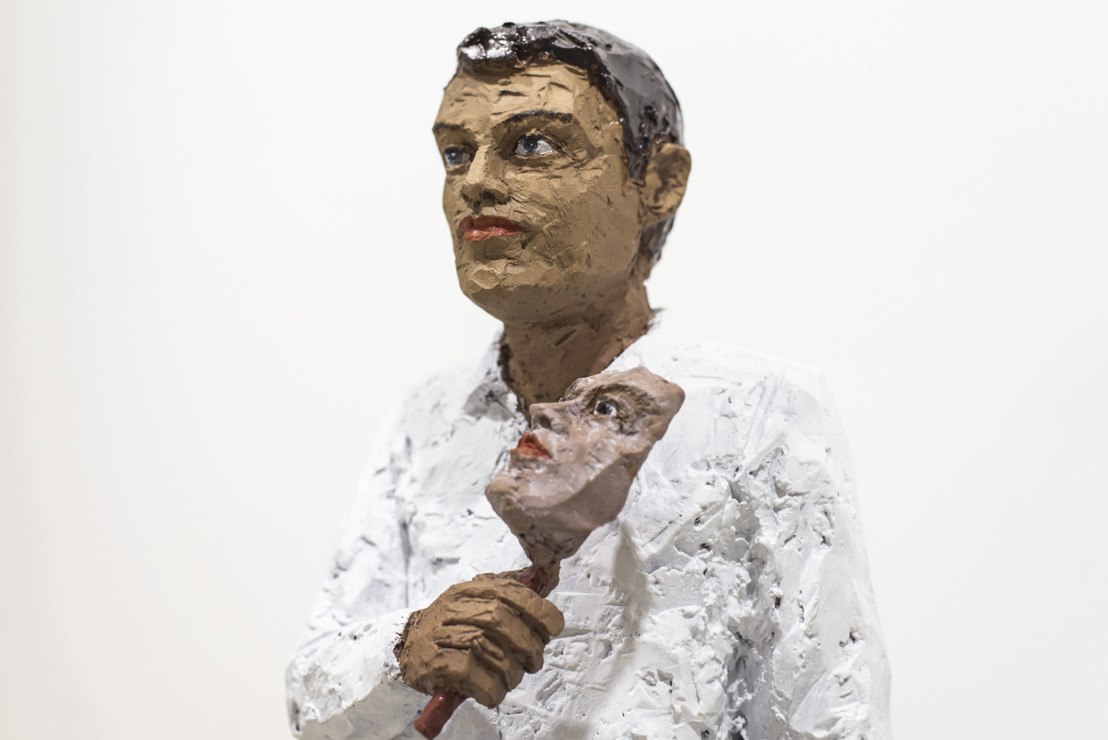 KETELEER GALLERY is very pleased to present a new solo exhibition by Stephan Balkenhol. The exhibition consists of an entirely new series of works, including 2 new bronze sculptures which are being introduced for the first time.

Stephan Balkenhol (°1957. Fritzlar/Hessen, Germany) is a German sculptor whose unique style gained him an inimitable place within the contemporary art world. Balkenhol is mostly known for his ‘dry’ sculptures. Roughly carved, hyper simplistic, anonymous human figures and animals, with a matt layer of paint. Lacking in expression, but not at all empty.

The artist makes big and small standing sculptures, often carved from a single block of wawa or poplar wood, but also 2 dimensional relief panels – portraits and landscapes uniting painting and sculpture – and bronze statues, meant to be able to stand outside. Many of his monumental bronze sculptures can be found in the urban space across the world.

This is the first solo exhibition of the world-famous German sculptor Stephan Balkenhol with the gallery. This exhibition symbolizes the new collaboration with Deweer Gallery Estate, of which KETELEER GALLERY took over the artist program at the end of last year. Balkenhol has been associated with the Deweer family for 40 years and their collaboration has contributed to the international character of both the gallery and the artist. KETELEER is therefore very pleased and proud to continue this legacy and has chosen to hold its first solo show at the Bremdonckhoeve in Brasschaat.

Already during his education at the University of Fine Arts of Hamburg (’76 – ’82), Balkenhol wanted to save figuration from the then prevailing abstract, minimal and conceptual art. But the artist doesn’t want to impose a hidden message on to the figurative. He’s interested in showing the people as they are, their perceivable form and the stuff they’re – literally and figuratively – made of. The direct, seemingly unfinished sculptures come across as quick sketches, fleeting impressions which do justice to the directness with which we generally notice people. The viewer has to fill in the gaps, imbue it with meaning. Fantasy and associations are in the eye of the beholder.

“In my visions my sculptures become a question, a mirror.”

Now and then absurd elements pop up: humans with animal heads, mating couples on antique vases, monumental figures with stretched-out legs… a sense of humour which counteracts the – at first glance – seriousness of Balkenhol’s works, emphasizing instead the artist’s overall playfulness. Man is never reduced to banality however, on the contrary, the mundanity of Balkenhol’s characters are in honour of the intrinsic value of man.

The artist will be present on September 19th

The Bremdonckhoeve is one of the oldest buildings in the region of Antwerp and has been used as a residence, stable and farm since the 14th century. The renovation into a contemporary gallery space was completed after 2 years in October 2019. After exhibitions with Antoine Roegiers, Panamarenko and Camiel Van Breedam it is now Stephan Balkenhol's turn. The unique and historical character of the space and the original beam structure will make it an intimate and special Stephan Balkenhol exhibition.

A bookshop, bar and sculpture garden has also been created at the farmstead, which will evolve in the years to come. Sculptures by Tony Cragg, Panamarenko, Jan Fabre, Guillaume Bijl, Enrique Marty, Koen Theys, etc. can already be visited in the garden and surroundings.