Modern Shapes Gallery presents a solo exhibition of Spanish ceramicist Enric Mestre (°1936, lives and works in Valencia, Spain) in the beautiful artistic avant-garde space of Atelier Jespers. Mestre is recognized worldwide, won many international awards and has participated in numerous individual and collective exhibitions around the world. Yet, this is his very first solo exhibition in Belgium, and a unique opportunity to see his works in the amazing context of the modernist building by architect Victor Bourgeois.

This exhibition project is opening during Design September on September 9 and is motivated by the pleasure of provoking the confrontation between the architectural space and the sober but poetic spatial constructions of Enric Mestre. Mestre's art is one of abstracted - silent - theatre. These sculptures are evocative - objects of an interlocking geometry, of light and shadow, that create tableaux for the imagination.

The sculptural objects of Mestre seem sober spatial constructions: boxlike, slab built architectural structures of austere colours dominated by right angles. But appearances are deceptive: these objects have a poetic charm which saves them from only being rational and cold. There is something profoundly spiritual about this work. It has a slowly achieved classical purity, but is also deeply felt. It transports one's mind to other places, both strange and familiar, and has a metaphysical pathos that is inherently Spanish.

Though these objects are often carefully planned and developed, Mestre insists on intuition – as if obeying a kind of constructive poetics restraining and controlling personal expressions without eliminating them.

"With his work, the artist has given us the opportunity to discover and recognize, through geometrical distributions, the structures and enigmatic nature of this world.”
- Frank Nievergelt

In Mestre’s work, space becomes a bearer of existential affirmations, as well as the object of philosophical considerations.

“ All the graphic and plastic roads I have travelled so far have always had the natural as a starting point, … This can lead me to the purest forms, which for me expresses with more clarity a personal vision of the world around us.”

Enric Mestre
from September 06 till October 07

Originally trained in painting, Enric Mestre studied at San Carlos Fine Arts School in Valencia. On the advice of a family friend he attended the ceramics school in Manises. During this time he met the ceramist Alfonso Blat, a crucial influence, for Blat was one of the seminal figures who, along with potters like Llorens Artigas and Francisco Ibáñez took Spain into the mainstream of modern ceramic art. Mestre, both as a teacher and practitioner, has himself come to be regarded as an important liberating link between this formative generation and that of Spain's younger avant-garde.
He was a professor at the School of Artisans, currently a part of the Valencian Art & Design School, EASD (Escola d’Arts i Superior de Disseny). Mestre is also a member of the International Academy of Ceramics (IAC), and for some years he was part of the IAC Council from which he organised the IAC 1986 Congress in Spain (Madrid-Valencia). Mestre has been awarded in several international events and has received the Gold Medal of the Baviera State in Munich (1976) and the Bayerischer Staatpreis Lotte Reimers (2010), as well of some other prizes in Spain.

Founded in 2012 in the heart of Antwerp, Modern Shapes Gallery is a gallery specialised in unique contemporary and midcentury studio ceramics. Modern Shapes is as much a gallery as it is a curated platform. A gallery, because it presents five to six exhibitions a year, dedicated to both rising and established talent in ceramic art. A curated platform, because it presents a very personal and balanced selection of objects, often balancing on the dividing line between design, art and architecture. Founder Michaël Francken’s personal taste and quirky passion results in a programme that combines both high quality 20th century ceramic masters and more contemporary artists working on the balance between abstract, sculptural and architectural work. But they all bear witness to craftsmanship and sculptural presence. As a result, Modern Shapes is a progressive and supportive space for emerging and established artists and their objects.

Built by Victor Bourgeois for his friend and sculptor Oscar Jespers in 1928, the workshop was used by Jespers until his death in 1970. The space, measuring over 400m2, was a popular meeting place for the European artistic avant-garde at the end of the 1920s.
In September 2015, Jean-François Declercq decided to turn it into an arts centre, a space dedicated to encounters and exhibitions. Under the name Atelier Jespers, the house returned to its initial mission: presenting. In a modernist setting, it now hosts artistic projects of all types, including design, mixed media and sound, with the humble ambition of creating a dialogue between the intention of Victor Bourgeois and the current works. 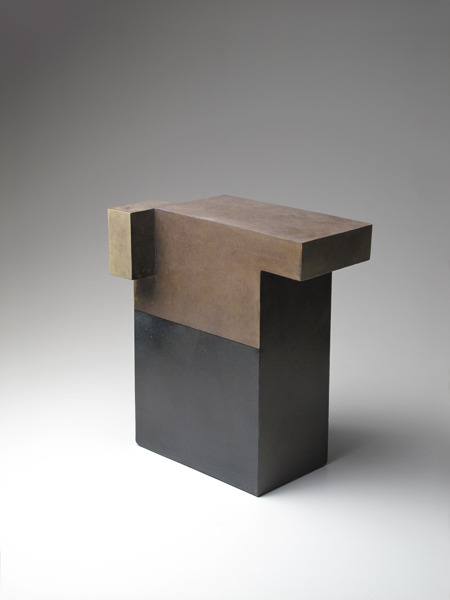