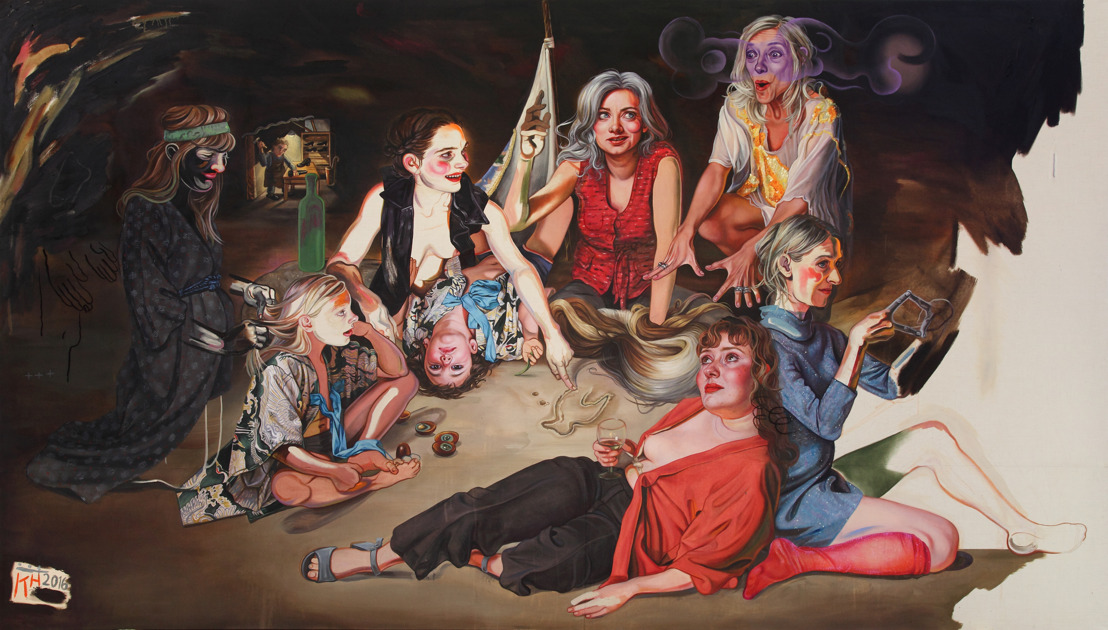 From 6 June to 8 November, the Kunstmuseum Den Haag presents the first major solo museum show in the Netherlands by Kati Heck (°1979, Düsseldorf, lives and works in Pulle, Belgium).

The exhibition, entitled Hauruck d'Orange, brings together more than twenty new and recent works. Besides paintings, drawings, collages and sculptures, the exhibition will also feature a video work. The staging will invite visitors to use not only their eyes, but also their body, their memory and their subconscious. Hauruck d’Orange will highlight Heck’s combination of various media and visual idioms, with abundant references both to art history and literature and to folklore, popular culture and autobiography. From enigmatic realism to cartoonesque sketches: Heck creates a parallel world where categories and meanings are fluid.

The work of Kati Heck is a masterful cacophony of colour, images and language. Her often large figurative paintings and sculptures bring two worlds together: one that is familiar and can be linked to events and people in the artist’s everyday life, the other absurd or downright disconcerting, like a fever dream. She presents her characters in a theatrical manner – posed or wearing extravagant costumes – and Heck herself regularly features in her work, each time in a different, almost allegorical form, as if she were her own muse.

Metamorphosis
The word ‘Hauruck’ in the title of the exhibition, Hauruck d’Orange, occurs frequently in Heck’s paintings. It is a word of encouragement in the German vernacular, meaning something like ‘come on!’. ‘Orange’ of course refers to the national colour of the Netherlands, the country where she is to make her mark with this solo exhibition. The three main colours in the exhibition space are a ‘faded’ version of the German and Belgian flags. To Heck, this symbolises the blurring of identity. The idea of metamorphosis – whereby one thing transitions to another – is also frequently seen in her work, as in two-headed creatures or hybrid human figures.

Kati Heck
Kati Heck lives and works in Pulle, Belgium. She studied painting at the Royal Academy of Arts in Antwerp. Her work was recently exhibited at the Deichtorhallen in Hamburg, CAC Malaga and M HKA in Antwerp. A lavishly illustrated catalogue published to accompany the exhibition will be available at the museum shop.