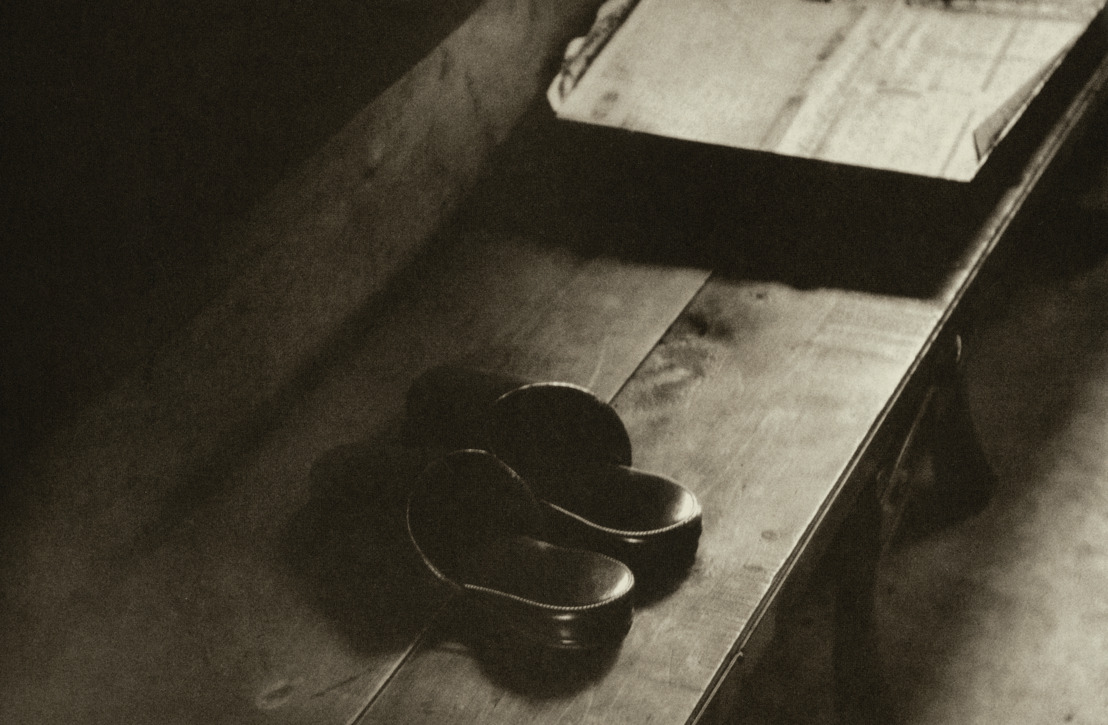 IBASHO is delighted to announce the Summer exhibition for 2020 which will be a group exhibition on the concept of ‘wabi sabi’.

The exhibition Wabi Sabi is an invitation to explore the elements of wabi sabi in the photographic works of 9 Japanese artists and 3 non-Japanese artists. And since wabi sabi is closely connected to the tea ceremony (chado), IBASHO has included 2 Japanese ceramic artists, who not only have made matcha bowls but also vases.

Wabi Sabi
When one asks Japanese people what wabi sabi is, it is hard for them to explain this concept. Most Japanese will understand the feeling of wabi sabi, but it is difficult for them to describe this feeling. That’s because most Japanese never learnt about wabi sabi in rational terms, since there are no books of teachers to learn it from. The seminal ‘Book of Tea’ written by Kakuzo Okakura in 1906 touches on many aspects of wabi sabi, but was written in English for a non-Japanese public.

The words wabi and sabi do not translate easily. Wabi originally referred to the loneliness of living in nature, remote from society; sabi meant "chill", "lean" or "withered". Around the 14th century these meanings began to change, taking on more positive connotations. Wabi now connotes rustic simplicity, freshness or quietness, and can be applied to both natural and human-made objects, or understated elegance. It can also refer to quirks and anomalies arising from the process of construction, which add uniqueness and elegance to the object. Sabi is beauty or serenity that comes with age, when the life of the object and its impermanence are evidenced in its patina and wear, or in any visible repairs.

Naoko Sano was born in Kyoto and now lives and works in London. Kyoto is a city built on the foundation of tradition, and the craft of ceramics is a honed artform that has been practiced in the area for generations. Sano has found her own style in her ceramics. Her matcha bowls and vases have an earthy, warm feeling with soft shapes. Her praying to the kiln gods before every batch goes into the kiln, has been advantageous for the end results.

Shingo Ohira was born in 1973 in Shigaraki, Japan and still lives there. He started building kilns in 2000 and has commenced making his own ceramics in 2010. Shigaraki is one of the oldest pottery producing places in Japan. Since it is near Kyoto and Nara, where the tea ceremony was born, Shigaraki tea ware developed naturally. Shigaraki ware is known for the special quality of its clay. By firing in wood-firing kilns, effects such as warm, reddish hiiro flashing, deep green natural ash biidoro, or burnt black koge can be achieved. As a form of art using the media of clay and fire, Shigaraki pottery communicates the Japanese aesthetic of wabi and sabi to the present age. Ohira’s ceramics are in the typical Shigaraki style. Seeing and touching his works gives a real wabi sabi experience.

Mika Horie’s works for example are fully hand-made and as natural as possible; from the paper that she makes from gampi trees and fresh water from the mountains, to her images that focus on the natural world around her, to the technique of cyanotype that uses natural daylight. Her works are therefore unique, imperfect, irregular and very wabi sabi.

Keiichi Ito also prints on washi paper, that is made by artisans from the city of Echizen, with techniques that have been passed on for 1500 years. The subjects of Ito’s works that are exhibited are sakura trees – symbol of impermanence within wabi sabi - and matcha tea bowls.

Miho Kajioka’s intimate, delicate, analogue prints insist on being regarded as not only images, but also as objects; the material physicality of her prints is affirmed through the asymmetric rims and edges, suggestive of wear-and-tear of having been in the world for a significant period of time. Kajioka’s images furthermore appear to enact memories through the toning of the prints and the liberal use of empty spaces - half-remembrances, faded but still visible. They’re moving towards nothingness, the ultimate simplicity, which is at the core of things wabi sabi.

Nobuyuki Kobayashi focuses on nature and its transience and impermanence. He believes that ‘seeing the grace in the way something sprouts up and then withers’, leads to the experience of wabi sabi. He has given his body of work the title ‘Myriads of gods’, referring to the animistic belief “that a god dwells in all things’ and that we should ‘live our lives with gratitude to whole matters”.

Naohiro Ninomiya will show works from his series ‘Nokomi’: carps that move effortless through water symbolising the constant movement of all things devolving towards or evolving from nothingness. Nothingness within wabi sabi is not an empty space, but is full of possibility. Also the irregular edges of Ninomiya’s images signify this constant movement in the universe.

Naoyuki Ogino’s works that will be exhibited are made by using the technique of salt printing, the first photographic printing techniques used in the 1830s. In those times it was a struggle how to fixate the image that appeared after exposing the negative to sunlight. One had to overcome the impermanence. Ogino fixates his quiet and intimate images printed on thin washi paper with natural bee’s wax, resulting in translucent, ethereal works.

Norio Takasugi has moved from Japan to Berlin in 2004, where he has been working around the theme of mass and individuality. His works show similarities and the differences between modernism and wabi sabi. His subjects are always nature related and although the negative remains the same, its reproduction produces subtle differences, resulting in unique pieces of work. This can be seen in the series ‘Silver Leaf’ in which Takasugi has merged screen printing and photography based on a rare Japanese technique that involves silver leaf and sulphur, dating back to the 18th century. Takasugi gets questions about why he makes the silver look dirty.  He gives his work the patina of aging, because he prefers the sabi beauty of aged objects.

Motohiro Takeda’s works also refer to the ‘one-of-a-kind’ works of art. His three gelatin silver prints of the sun are all different due to differences in the darkroom-processes. Takeda’s multi-layered large work is the result of using his room as the camera obscura and permitting the sunlight to peep through a pinhole and to create a unique image. The image resembles the wabi sabi thought of new things, possibilities, emerging out of nothingness.

Akiko Takizawa has a deep spiritual personality which can be seen in her work on display, that tells the story of Osorezan and Goshogawara, places connected to the belief that human spirits go up into the mountains once they die. The temples on these mountains are known for calming the souls of dead children and unborn babies. Takizawa feels very connected to these souls. It seems that she is in this space of nothingness being a medium between earth and another dimension.

IBASHO will show works by 3 non-Japanese artists who are attracted to the concept of wabi sabi and whose works show wabi sabi elements.

The Spanish couple Albarrán Cabrera feel that the aesthetic-moral values of wabi sabi have helped them “to open our eyes to the new aesthetic sensibility of those who are able to gain peace and serenity against the lightness of being of all earthly things that are destined to vanish with time.” Imperfect beauty leads them directly to infinite beauty.

In the works of the Dutch Casper Faassen from the series ‘ReCollection’, the appreciation of Japanese concepts of impermanence and imperfection can be spotted. Such as the veiled images of the photographed breakable objects disappearing into the background. The use of gold in the cracks on the top layer of the works refers to the beauty of imperfection.

The exhibited collages of Margaret Lansink, also a Dutch artist, represent the mending of the relationship with her daughter, who earlier decided to cut all ties with her mother. The title of this series ‘Borders of Nothingness – On the Mend’ is a direct reference to the wabi sabi notion that new things emerge out of nothingness. The use of ‘kintsugi’ in creating her collages emphasises the higher beauty of things imperfect, broken and mended.

To read more about the concept wabi sabi, we refer to the book ‘Wabi-Sabi for Artists, Designers, Poets & Philosophers’ by Leonard Koren, which book was used for the texts on the IBASHO exhibition ‘Wabi Sabi’.